I have a pretty laid-back philosophy on preschool and believe that most learning is done through just living life together and play. I also have a four year old that has been telling me that he was ready to ‘do school’ like his older brother and sister.  When I was given the opportunity to review Dimensions Math PK-5 by Singapore Math Inc. I was hesitant. I knew that my son wanted more ‘schoolwork’ but I was not sure that a formal math program was going to be the best fit. I decided that it would not hurt anything to give a try and see how it went.

I requested and received PKA, which is the first semester of Pre-Kindergarten. When it arrived it reminded me very much of curricula for a tradition classroom in the sense that it had a large teachers manual, a student textbook, and a student workbook. For the Pre-Kindergarten level both the workbook and the textbook are consumable resources designed to be written in by the student. They also have some printable blackline masters and cute videos on their website to accompany the curriculum.

When I started looking through the teacher’s manual, I was pleasantly surprised to find many hands on and play based activities. This curriculum is often used in classrooms and so they have group activities, centers, and individual activities included.  There were art activities, snacks, and even book recommendations to extend the lessons. 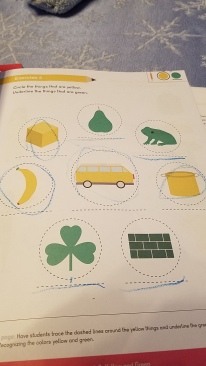 Most days when we did math I would go through the short lesson with him, pick one or two activities and then do the textbook and workbook pages. This generally only took about 15 minutes per lesson unless he wanted to spend longer on an art activity or something like that. My four year old thought it was great fun and would ask when he could do math.

Since it was also designed for classroom use I wanted to give it a try with a small group of children. I only have one preschooler but I had friends that were generously willing to loan me a few more for the morning. I tried a lesson with four children to see how the group activities would flow and how the curriculum might work in a co-op or classroom setting.

The children really seemed to enjoy the activities. The lesson that I chose to use was part of a unit where they were learning to compare and contrast various objects. This particular lesson taught the concepts of smooth, rough, and bumpy. Since I only had one workbook we could not do that portion (if you were going to use this regularly with a group you would have each one purchase a textbook and a workbook) but we read through the lesson, looked at the examples in the textbook and then completed some of the group and center activities.

They had chance to feel objects in a bag that they couldn’t see. Then they guessed what they were along with describing them using one of the three descriptive words. They had a chance to feel various objects like smooth satin, rough burlap, bumpy bubble wrap and more. Then they sorted objects into the three categories, sanded rough wood until it was smooth (or they were bored), and used various rough and bumpy objects to do rubbings as an art project. We finished up with a smooth and bumpy snack of apples and pretzels.

I felt that the PKA level was a little easy for my son, but I could have avoided that by having him take the kindergarten placement test before we chose a level. I really like starting at the beginning of a curriculum and since he had never done a formal math curriculum I thought that would be a good place to start. He enjoyed it but it was mostly review of concepts that he already knew. I think this would be better for a child that was a little younger or not as advanced, though again he enjoyed it and it worked well for getting him in the habit of doing a math lesson about three times a week.

While I still do not believe that most children need a formal math curriculum for Pre-Kindergarten, if you wanted the structure of a program at that level or if you had the opportunity to work with a co-op or other small group of children Dimensions Math PK-5 has a lot to offer. I love the hands on nature of many of the activities and the reasonably short lessons to match the attention spans of young children.  I am looking forward to reading the reviews of other Review Crew members to see if the other levels were as hands on and interactive as PKA.